and yeh.. so I kinda stole your Image from the wake up scene and turned it to my wallpaper :>

it says updated, but its not in the devlog 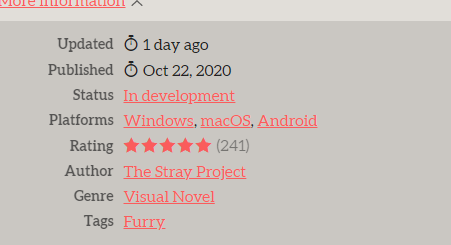 its cause the update is probably made to fix minor bugs and typos.

yehh, i played the game they added minor yet nice details to the game

also, on the feed says that they added the Linux version

it was just bug fixes. (the minor details)

I love it already, I can't wait for mooore!

Pretty sure they just made it available for Android and Apple Devices.

What a sweet surprise! Good moooorning!

favorite thing about this game

Reply
the guy who asked2 days ago

while there be specific nsfw scenes *wink wink*

When is the next update?! It's been quite awhile

I'm totally obvious of this info...

if you press the 'more information' and click their user its there , but here: https://twitter.com/TheStrayProject . theres no release date for chapter 2 which is a good thing cause deadlines bring stress, its being worked on though.

I really liked this, can't wait for the next build to get released !

Hey there! Just downloaded the game, curious to start it, but I did notice that the PC zip version, despite being labelled as only Windows compatible, runs perfectly fine on my Ubuntu Linux, with no tweaking needed whatsoever.

I'm not familiar with renpy (yet), but to me, the way your visual novel runs is identical to the way that other renpy VNs (labelled as Linux compatible) run on my computer. I've noticed this with two other renpy VNs as well, which were labelled as only Windows compatible, but ran out of the box on my PC.

Maybe you wanna check whether the PC release is generally compatible with Linux, and if yes, update the label on it. So far, I've always filtered by Linux compatibility when searching for VNs, so I would have overlooked your game when just browsing the search results.

I absolutely love the artstyle, it's gorgeous, really colourful and really well drawn. The artist really outdone themselves with all the CGs and the backgrounds

The characters are loveable, I already enjoy their banter and their dynamics

It's difficult for me to pick a favourite for now. Kim is a bit "cliché" being the good boy and the self proclaimed leader but he's nice and friendly. Beru is adorable and hilarious, wanna hug him real bad

And then there's Terry. He's a tsundere, and that only makes me want to tease him even more. Surprisingly he might be my favourite character so far, I like how he's difficult to approach but feels like he's a softy on the inside.

Aside from those 3, Owen seems pretty fun. And Lucy is terrifying.

All the three potential routes are equally attractive in different ways, it's rare for me to struggle to pick a favourite when it comes to looks only (have a slight preference for bears so Beru would be an obvious pick, but Terry has a special something)

Looking forward to the next update, hoping it's coming soon !

I hope the next build comes soon

THE GAME IS PAWSOME!!! I want play it fully in future >w< the design, the story, the characters personalities are so cool!

I like this game very much, especially the lovely drawing style and realistic story. It will be one of the games I am most looking forward to

are there nsfw scenes?

I really loved this game. Still waiting for what comes next :)

makes me think of winds of change

Reply
The Stray Project284 days ago

oh why is that?

Kim's such a husband material :>

How're you guys holding up?

we still writing the script

Is the writer ok? I checked Twitter he seemed to have made a beautiful shitpost

Just played through this, looks very promising!  Thanks for posting!

What species is the mc??

He could be anything.. we let the player decide because you never gonna see the mc (also he not human)

Wait the what same sex romance is there between?

I believe the artist involved had gotten into...a bit of an issue online, it's a mess. The devs of this game have decided to continue progress despite what occurred in twitter

Search up Flunky Drama on twitter, it's a mess. This person explains all the issues that occurred
Twitter: @Gay_Boi_Charlie Flunky

i couldn't find anything, can you quickly recap it?

oh yes! one more thing, is there a patreon or a kickstarter/gofundme/whatever that i can support the devs progress on this at all?

this game has the most potential out of ALL of the W.I.P vn's and if it was a full game i would be willing too pay like 40 bucks for it ngl <3

Oh my gosh, I can't wait for incoming update. I just play this and Beru-ang already become my top favorite, he was so cute. Also I'm a bit suspicious about this bear because he seems.. just,, sus :)

No one can reject dumb innocence bear

Is this game only for males?

Males and female both can play the games

I already love it because of the art style. Can't wait to see where the story goes from here. So far its a bit generic but i assume it's just to keep options open.

Reply
The Stray Project306 days ago

This game looks so cute, Imma try it

It was a really good game, each character had personality (especially Beru, although I may be biased, maybe) and all the character designs were great and the small drawings that appeared when Beru commented on something were cute, I'll be eagerly awaiting more.

Yeah uh yeah you can have your own opinion

very funny，are you lost your mind

About how much blood and death are we talking about here? I am weak to sad painful deaths.

Uh, graphic depictions of corpses, I'm fine with it but it might be different for you

Ohmyohmyohmyohmy! How stomach-turning! Thanks for the comment, I'll think about it.

For the graphic term we might make a setting where player can turn off the blood.. But there still in the text message describing the accident.. sad and painful death can be avoided..

Oh cool. I guess for now I'll just hear it from my more iron willed friend. ;-;

is there a way to help support development for this game?

Well this was certainly something fresh, I like it, and the character designs are all so cute.  Too early for me to give an honest review but first impressions are great, little biased cuz Beru is SO freaking adorable, but I'll manage.  Kim's pretty cute too so a close second (also headpats) so I can't wait to see more